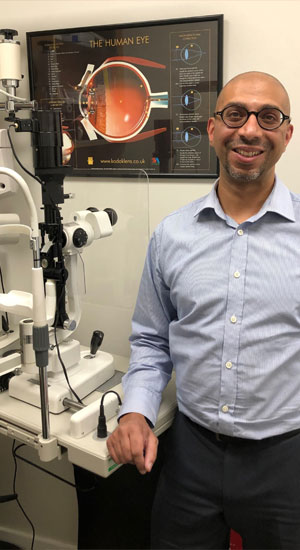 Mohamed is an Optometrist, SchoolVision practitioner and Director of Feltham Eyecare Centre who has a passion for delivering the very best eyecare experience in his local community. With over 20 years’ experience as an Optometrist and business owner, he continues to further develop his skills, learning new techniques and continually investing in the latest technology in eyecare to provide a gold standard experience for patients of all ages.

Mohamed has always had a strong family connection in the healthcare industry, where his uncle was also an optometrist, and during Mohamed’s teenage years, he worked in his dad’s pharmacy whilst studying which is where he developed a passion for making a difference in the health care sector and to deliver a great customer experience.

Having graduated in Optometry from Bradford University with Second Class Upper Division honours in 1998, following a year of training in an independent optical practice, he qualified in 1999 registering with the GOC and becoming a member of the college of Optometrists. He then worked in a multiple practice for a year but the desire to follow his dreams and move back into an independent practice was too strong.

An opportunity arose to take over his dad’s friends practice, where he rebranded as Feltham Eyecare Centre on 5th March 2001 and has served the local community as well being the Local Optical committee secretary for over 20 years.

A strong family man, Mohamed loves spending time with his family and also enjoys travelling. He sees all challenges as opportunities where every day in practice is never the same, which keeps work and his love of optometry exciting. He says that the best days are making a positive difference to patients’ lives, be it helping them to see more clearly, saving peoples sight and health following a referral and is thrilled when patients love that we have helped them to see well, look good and feel spectacular. 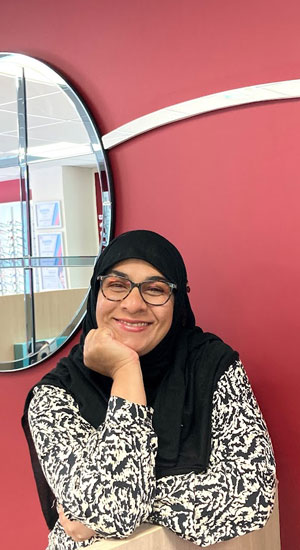 Fermin originally worked at an independent bank and was introduced to the world of optics after joining the family business in 2001, which was the year she married Mohamed. She has since then, been a valuable part of the Feltham Eyecare Centre team where along with the original receptionists, Betty and Brenda, went through extensive training to improve her optical knowledge as well as gaining hands-on experience with spectacle lenses, frame materials and the adjustment of spectacles to ensure every patient received a comfortable fitting frame both across the nose and behind the ears.

Fermin then went on to complete her 3-year dispensing course at City and Islington College and has been a fully qualified Dispensing Optician since 2010 and has around 20 years’ experience within the industry.

Fermin says that Feltham Eyecare Centre has given her the grounding to grow and develop both personally and professionally and has met some amazing patients over many years. She has had the opportunity to train and develop different members of the Feltham Eyecare team and has also worked alongside other optical professionals including locum Optometrists and Pre-reg students who have joined the team over the years.

She has always looked forward to the light-hearted chats that she has with patients and is always fascinated by the different job roles and hobbies they have. From simple things like what’s growing in their garden or allotments, through to the recommendation of a good book or a new show, to something completely out of the ordinary such as Fabergé eggs or Classic cars. Having never heard of Fabergé eggs, Fermin says she was completely blown away when a patient showed her their personal collection.

Fermin is proud to have so many loyal patients who, through the years, have seen her daughters grow up where she remembers the many chats they had with them as little girls. She has also seen some of the Feltham Eyecare younger patients go through school and have joined prestigious universities and ventured onto their chosen paths in life. Fermin states it is such a pleasure to share moments of pride with proud parents and grandparents and that it will always stay with her, regarding the support of the valued patients shown when her and Mohamed went through their kidney transplant surgery as a couple.

Fermin is proud of the many friends gained during her time with Feltham Eyecare Centre and it really does make a positive difference making the journey at the practice, more than just a place where they get their eyes examined.

As a dedicated member and leader of the Feltham Eyecare Centre team, Fermin is always looking for new innovative ways to take the practice forward in both clinical excellence and a great customer experience and aims to provide patients with the personalised and trusted professional healthcare for many years to come. 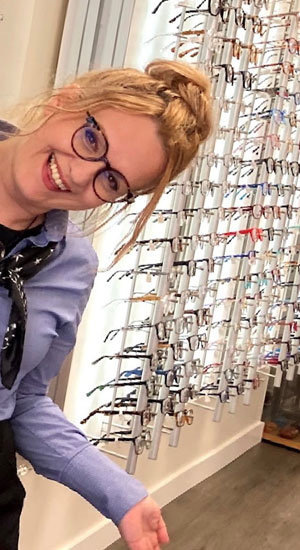 Aleksandra is an Optical Dispensing Assistant as well as our Fashion Frame Stylist and Lens Expert. She found her love of the world of optics over 7 years ago where she loves meeting patients either returning for their next eye examination, collecting their fab new spectacles or meeting someone new for the first time.

Aleksandra is a keen explorer and enjoys learning new things in life where she loves obtaining knowledge of new ideas and techniques to provide a positive memorable experience. She used to run her own business in the past so understands the importance of great customer service and meeting new people has become her passion.

She has completed various training courses to help patients find fantastic new eyewear to either blend with your natural face shape and colouring or to try spectacles to create a bold statement. She loves to spend time offering the latest advice on visual solutions depending on your individual lifestyle choices which she says is really important to ensure you always have the best vision for work, rest and play so that you are delighted with your purchase.

Outside of work, Aleksandra devotes her free time mainly to art where she loves to paint. She also plays the piano and is a keen amateur writer.